Anju Pandey and CENUK with kind donations from my friends in the UK are sending, with Government officials, blankets, rice, clothing, medical supplies to Gulmi an area badly affected by the rains which have caused large landslides, temporary shelters, tents during those tough times.

Child Education Nepal UK was established in 2007 and is a small charity looking to make a difference.  What makes this charity different from nearly any other is that every cent donated goes to the children of Nepal, there are no administration costs.  In fact, the founder stays in Nepal from April to December to project manage and to ensure all monies donated goes to the areas needed.

Our Chairman and Founder after leaving the British Army on completion of 28 years service went on a round the world holiday with a view to finding people that were in desperate need of help. Of course there are many poor countries but none that are poor as a direct result of no resources and not conflict. The last country before returning to the UK was Nepal and it has   been visited annually every since. Nepal relies heavily on tourism and its citizens working in the Arab states who send money back to their families which of course is taxable. The people accept they have nothing and happily get on with their daily lives trying to make something of themselves. We can help by education.

Nepal is rated in the world top 10 for poorest countries.  This is not down to war or lack of effort but purely to the lack of resources.  Nepal is however, one of the UK’s closest allies due to the connection with the Ghurkhas, hence the reason for CENUK working mainly in the village of Ashrang in the district of Gorkha and Palpa in the Lumbini district for the education and health of children. The two earthquakes in April and May had a devastating effect on the lives of people in Nepal especially children. Many schools were completely destroyed and will need to be and have been rebuilt.

\The funding for all projects is an on going battle and most of the funding are provided by the charities trustees, St Barnabas Church and Bebbington cubs and scouts and our Chairman himself. Most funding has come out of profits from the founders small independent travel company. Unless there is a major catastrophe obtaining funding has proved very difficult. Nepal is not newsworthy and yet it is one of the very few countries where over 125 different castes and ethnic groups live in harmony. Nepal has never seen war apart from the Maoists insurgency in the 1990s and the people have generally lived in peace.

Yes we are succeeding in building new schools (only half of what is needed) but with the proposed project of getting every child into full time education it means more teachers, more required space. Any assistance in whatever form will be gladly and gratefully accepted. CENUK is a very small UK registered charity looking to make a difference but like everyone we need help. We do not advertise, due to funding and a reluctance not to have any administration costs. It is important that every cent goes to the children of Nepal.

Nepal has a population of over 27 million over 50% live on income of $2 a day, to put a child through school is almost 2 months wages unless Government funded. CENUK believes that the only way out of poverty is by education. The education of children will deteriorate due to the collapse of the tourist industry due to the earthquakes and the main fact that over 60% of the Nepalese population is under 16 years of age. There are not enough jobs and even less wealth generated through the tourism so parents cannot afford to send children to private schools which are far better than Government,

CENUK tries to help by the building and the funding of schools and training of skilled teachers. We have supplied computers but Nepal has the slowest internet speed in the world so the only real way of education is through teacher student instruction. We are achieving results but to continue this without additional funding this will be impossible. Government schools although free only teach Nepali medium, unlike private schools who teach the four core subjects of Nepali, English, Maths and Science in English. It is also a sad fact that Government schools cannot attract highly rated teachers due to insufficient pay.

1. The proposed building of a new computer library with 10 stations and powered by a 1000 watt solar panel.

2. The specialist training of two teachers/librarian in IT skills

The Palpa project has been guaranteed 10 years of funding from Trustees (direct debits)/Donors, Bromborough Church and Tyrolean Adventures Limited. This funding is as follows

The total cost of the computer library, including building, racking, 1000+ books (not school books), computers, chairs, tables, teacher training is $30000

Any assistance in whatever form will be glady and gratefully accepted. CENUK is a very small UK registered charity looking to make a difference but like everyone we need help. We do not advertise, due to funding and a reluctance not to have any administration costs. It is important that every cent goes to the children of Nepal.

On Saturday, April 25, 2015 a massive 7.8 magnitude earthquake struck Nepal, just northwest of the capital of Kathmandu. It was the worst quake to strike the region in more than 80 years. It was only 15 kms from Ashrang.

The area was hit with a second 7.3 magnitude quake just 17 days later, on May 12, causing further damage and suffering for those who had survived the initial disaster.

Strength: 7.8 on the Richter scale.

Epicenter: Less than 50 miles northwest of Kathmandu, the country’s capital in central Nepal.

Depth: 11 km/6.8 miles. The source of the earthquake was relatively shallow, contributing to its strength and the resulting damage.

Aftershocks: Hundreds in total; two major aftershocks of 6.6 and 6.7 magnitude, and a second 7.3 magnitude quake on May 12.

Death toll: Around 8,700, including around 150 people who were killed during the May 12 quake.

Homes and historic temples crumbled, roads damaged and communications made sporadic. Avalanches on Mt. Everest. We received reports from more remote areas that entire villages were destroyed without a single home left standing. Water systems in hillside villages were wrecked. Terraced farms and cattle were wiped out by the quake or subsequent landslides, destroying people’s entire livelihoods.

Areas affected: 40 percent of Nepal. 39 out of 75 districts reported damage. Deaths were also reported in neighbouring Tibet and India.

CENUK delivered aid to Muchhok (only 5 kms for the epicentre) Ashrang in the Gorkha district of Nepal as well as Kathmandu, Sindhupalchok districts.

Nepal, well known for its rich cultural heritage and extreme tourism, is one of the poorest countries in Southeast Asia. The damage done by the quake put a strain on its citizens that will last for many years.

Chepang is an isolated indigenous ethnic group living in the Central and Southern part of Nepal. They are severely restricted in health and education resources so it was with great pleasure CENUK representatives Garima and Sujata planned, organised and completed this project 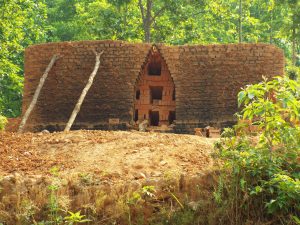 2012 – plans are made for the building of earthquake resistant school

2016 – school finished and handed over to school committee